The King James Crystal Bible® is the reproduction of the complete Original 1611 King James Version of the Holy Bible in English.

The Catholic, Latina Vulgata Crystal Bible® is the reproduction of the complete Biblia Sacra Vulgata in its original Latin language (known Vatican's Bible).

The Septuagint Crystal Bible® is the reproduction of the complete original Septuagint Bible in ancient Greek.

Historical facts about the Septuagint Bible

Historical facts about the Holy Bible 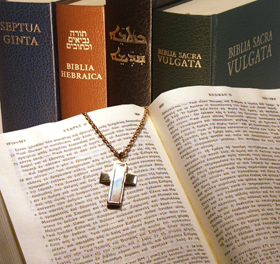 The word “testament” stems from the Greek word diathiki (testament, agreement) and translates into Latin as testamentum (testament, testimony). The Greek term has a broader meaning (agreement) than the Latin one, and some prefer to translate it as “alliance”.

During the formation of its canon, the Bible was originally not one book but a series of books and brochures. The notion of the Bible as a unique book is a rather modern one, despite the fact that it was assembled as a codex (book or compilation) during the 2nd century A.D. In the 4th century A.D., the Bible was still referred to in Latin as "Bibliotheca Divina", “The Divine Library”.

Crystal Bible® are now offered in three versions of the Holy Bible:

And we plan soon :