The LATINA VULGATA BIBLE is the CATHOLIC BIBLE

The Crystal-Bible® adopts a high technology in order to reproduce integrally, both Ancient and New Testaments of the Bible, according to the version/translation of Saint Jeremiah. 3 millions 300 thousand characters are numerized on 337 surfaces, each of 421.4 µms x 593 µms are reproduced on a tiny crystal. Nanographx (LuxnanoGraphics) is the first publisher of the worlds’ smallest version of the Biblia Vugata latina using and submicronic writing process from nanotechnologies.

The word «Bible» derives from the Greek biblia which means papyrus rolls, volumes or books, and literally: brochures. The First Greek Christians called the Scripts « Ta Biblia », e.g. «the Books», as a reference for "THE preeminent, "Supreme", Books".

The word « testament » derives from the Greek (diathiki, testament; agreement; convention) translated in Latin as testamentum (testament; witnessed). The Greek term has a broader meaning (agreement) than the Latin one and many persons tend to translate it as Alliance.

The Bible wasn’t composed, in origin, of one Book, but of a series of Books and Brochures, during the constitution of its canon. The common notion of Bible as a unique Book is rather modern, despite the fact that it has been assembled as a codex (Book or compilation) during the 2nd century AD. In the 4th century AD, the Bible was pointed in Latin as "Bibliotheca Divina", i.e. «Divine Library ».

Origin of the «Biblia Vulgata»:

The language of Platon became the one of the civilized world, the Hellenic culture dominated the Mediterranean coasts and the conquests of Alexander spread it to the hub of Asia. Greek, as first « universal » language, traced the success of the Septuagint Version, which shattered progressively the original Hebraic text, and restricted its adoption to Palestine.

In the 4th century AD, things changed. Greek was the language of the educated class only, a language spoken fluently on Egée coasts. Latin became the official language of the Roman Empire, at the apex of its glory. Roman legions imposed it on all conquered territories. Alike many others, Christians adopted it; accordingly their sacred texts, written in Greek, were understood by only a minority of believers. The Latin translations were numerous (compared to the Greek ones) and varied according to the regions and manuscripts with respect to style and accuracy.

At the end of the 4th century, many priests were aware of this huge inaccuracy. They’ve carried out various Latin translations of the Bible but none was rewarding. Damase 1st, Archbishop of Rome 366 - 384 (the designation Pope appeared later on) deliberated the problem with his first Secretary, Hieronymus, known as Jeremiah (332-420). The choice was rather judicial. Jeremiah was a polyglot erudite mastering the languages of the original texts and a humble person, who loved and served God.

The Pope Damase entrusted to Jeremiah the mission to edit a standardized version. Thereupon, the Vulgate was associated to Saint – Jeremiah (347? – 420) and reversely when speaking about the latter we must evoke the Vulgate. Jeremiah studied zealously the Scripts, and provided in his text full comments on both Old and New Testaments, the Latin translations of the sacred texts of the Greek Septuagint Bibles or the Hebraic Old Testament.  When Damase 1st, died Jeremiah had a great chance to succeed him; still, he was dismissed. Consequently he had plenty of time to achieve his translation 15 years later. He started the translation of the New Testament on 382. On 385, he began the one of the Old Testament and for this purpose went to Palestine. Driven by his aspiration to find out the veritas hebraica that lay beyond the Greek heritage, Jeremiah lived in Bethlehem and consulted the Jewish scholars, specialized in Hebraic texts.

Jeremiah was requested to transcribe the Greek version of the Septuagint in Latin. At first, he abided by the instructions, including profane narrations incorporated in the inspired scripts. Ptolémée -Philadelphe, a literature passionate, ordered 72 Jewish scholars from Alexandria, to transcript in Greek all the existing Hebraic texts… Still, he was fed up of assembling inconsistent parts. Jeremiah decided to go back to the origin and translated the Old Testament written in Hebraic.

By doing so, many profane scripts unconsidered as divine by the Jews were confused with the Version of the Septuagint of Ptolémée Philadelphe. The emerging Christianity could never discern the extra canonic aspect of such texts. Jeremiah alike many others acknowledged the legendary characteristic of these Books. He has translated the same and marked it with footnotes. This is the « Prologue Galaetus » reproduced all over the Middle Age by transcribers as heading of the two books of Samuel: “any script that does not appear amongst the 24 Books of the Hebraic Bible shall be considered as the Apocrypha i.e. non canonic”.

Jeremiah proofread the Latin versions of the Greek Christian Scripts. He translated the Hebraic Scripts directly based on the original Hebraic texts. In 386, he went to Bethlehem in order to study Hebrew and was assisted by a Rabin (Jeremiah translated by himself, in Latin, the Aramaic version of the Book of Tobie, translated verbally by the Rabin). His action was controversial accepted amongst clerics: some alike Augustin, contemporary of Jeremiah, believed that the Septuagint was rather inspired and accused Jeremiah of “becoming Jew”. Jeremiah persevered and ended his work in 400. His ability to manipulate languages, handling original documents and translating the same into the lived language of the century, he preceded 1000 years earlier the modern methods of translation. Jeremiah was an integral man, faithful to the Scripts’ schooling; he was a man of words. He choose the right moment to abandon the philosophic currents adopted by the priests of his era; Christianity was wallowed in many heresy. Jeremiah did not only translate the sacred texts, but aspired to stabilize the trends and bring archbishops back to practices complying more with the biblical doctrines. In effect, his ideas generated many reactions; He was personally put in question and many plots prepared against him; he was accused of aspiring for « Judaism » the church, used the words of Paul when reprimanding Peter. cp. Galates 2:14. The fantasist nature of the Jewish literatures’ anthology is hauntingly present as we read the epilogue of the 2nd Book of Maccabaeus. This anthology may have been interesting during its century but its core was too far from the Holy Script.

Translations carried out by Jeremiah, based on the Hebraic text or the Septuagint (for the non existing Books in Greek) were congregated along with large sections of the ancient Latin version, in order to constitute the new Latin one. For various reasons, this version was largely opposed yet imposed itself progressively. At the beginning of the Middle Age (11th century), it is noticeable that its primacy was broadly recognized in the Occident where it was referred to as the « common version » of the Vulgate.

The Text of Jeremiah was achieved in 405. Jeremiah bequeathed to the future Occidental churches a great treasure, the Latin Vulgate Bible.

To oppose the rising Protestant reform promoting the public diffusion of biblical texts, the Catholic church was in need to reconfirm its doctrine. Upon motion of the Council of Trente (1545-1563), the Latin version of Saint Jeremiah was ratified as genius in 1546. Therefore, the Vulgate may be deemed as one of the instruments used against the catholic reform.

The Latin Vulgate had a great influence. In the Middle Age, it governed the official decrees of the church, the Liturgy and the theological treaties. It has overwhelmed before the instauration of national languages. The first French translations carried out by Catholics were based on the Vulgate. In 1555, Robert Estienne published the Latin Vulgate; it was the first integral Bible bearing the current numbers of chapters and verses.

In 1593, a proofread version was published: the «Vulgate sixto Clementin».

The first Catholic Bible constituted of translations inspired of the original texts instead of the Vulgate was the one of Crampon (1894-1904).

In 1943, Pope Pie XII expressed officially his encouragements to work on original texts instead of the Vulgate.

Gutenberg, inventor of the mobile characters, printed the Latin bible of Jeremiah for the first time in 1456.  In 2006, 550 years later W.N.G. - Graphilux International, used nanotechnologies in order to reproduce the worlds’ smallest version of the Biblia Vugata latina.

The « Latin Vulgate Crystal-Bible® » contains a key symbol, the CHRISM. The latter is placed at the end of the Old Testament and inversely the beginning of the New Testament.

This symbol is called in Christian mysticism the "monogram of the Christ".
The Chrism, has appeared earlier in Christian monuments, in which the Greek letters X (khi) and Ñ (rhô), with reference to the first letter of the word Khristo ×ñéóôüò (Christ), were superposed in opposition to each other. At the roots of the X, we could read the Á (alpha) and Ù (omega). These letters symbolize the beginning and end of time since they signify that the Christ is at the creation and at the end of existence. The Chrism appears also in other forms associating the Greek letters I (iota) and × (chi) initials of Iesous ×ñéóôüò (Jesus Christ). The Chrism is represented in a six rays star in reference to the star that has guided the mages. The Graphics varied drastically and were endowed with rich symbolism. 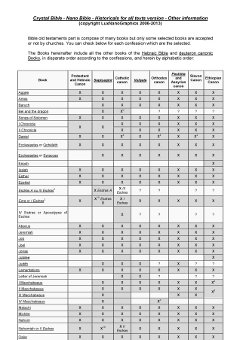